In the previous couple of posts, we established that menstrual leave – a predominantly East Asian employment policy that allows (all) female employees to take time off work during menstruation – does not help to protect fertility nor can it improve menstrual health.

What is interesting is that some East Asian women’s rights activists and labour unions continue to fight for menstrual leave, even though it doesn’t deliver the health benefits it should [1].

In this blog post, the third of five in this series, we look for answers to this puzzling situation by studying the working conditions commonly found in countries that endorse menstrual leave policies. They certainly seem to have a few things in common… 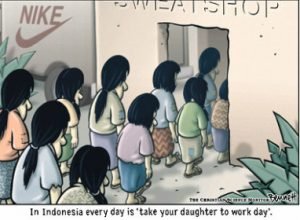 Nearly all ‘menstrual leave’ countries have rapidly industrialising economies, typically involving very poor working conditions such as those described as ‘sweatshop labour’. It is usually mainly young unmarried women who work in these exploitative and physically demanding working conditions [2].

“I posed the question [about Indonesian menstrual leave] to several female and male workers, labor organizers, and student activists. The consensus was that the menstrual leave legislation wasn’t necessarily drafted for women with office jobs or other positions that are not physically demanding. The two optional menstrual leave days are believed to be aimed at the tens of thousands of factory workers who cannot freely go to the restroom throughout the day, cannot afford pads and pain medication, have mandatory overtime, and work 10-15 hour days on a regular basis, sometimes standing for the duration, just to survive” [3].

Check out this recent BBC video about the situation faced by migrant workers in Japan (it doesn’t cover menstrual leave but you can get a good impression of what working conditions can be like, especially in textile and other manufacturing industries).

2. A lack of toilet or rest breaks

Demands for menstrual leave have frequently been made in response to a lack of rest or toilet breaks. Bus conductors in Tokyo, for example, first pushed for paid menstrual leave in 1928 because they found it difficult to work long shifts while menstruating without any access to toilets [4].

Ironically, it was noted as early as 1936 that the introduction of even the shortest of rest breaks could alleviate menstrual health problems and increase productivity, but many factories continue to restrict access to such basic human needs [5].

“NIKE workers have only 2 bathroom breaks per day. In one factory we researched there were five toilets for 2000 workers, six toilets for 500 workers, nine toilets for 1000 workers, and three toilets (two of which were broken) for 350 workers. Workers in that factory also said there is always a line for the bathroom, and there is never enough clean water for the toilets. Union organizers and Indonesian student activists told us that it’s not only in NIKE factories where these conditions exist, but also in factories producing apparel for the Gap, Old Navy, Tommy Hilfiger, Adidas, Fila, Reebok, and Polo to name but a few.” [3]

Sick leave is not as common in East Asia as it is in the UK and Europe [6]. This means that workers may be forced to take unpaid sick leave or, if they cannot afford to do so, to continue working despite ill health.

Even where paid sick leave is provided, some countries or companies have been known to penalise its uptake. This can be done by limiting the number of sick leave days available per year, by cutting a worker’s salary, or by providing cash incentives to those who do not take any sick leave (all year) [7].

“Some men point out that only a few countries in Asia have the system and most Western countries don’t have it and therefore that it is unnecessary. However, Western countries have far better well-designed [leave] policies which tailor to the needs of its employees… For women in those countries, there is no need for them to even inform the company that they have menstrual cramps, since the companies allow paid leave for any sort of sickness… In Korea, employees are not even able to freely take sick leave and it is especially so for non-regular workers” [8]

4. A continued desire to ‘protect’ motherhood

The following quote reveals how this argument about ‘protecting fertility’ can be used by activists to argue for better working conditions;

“In personal accounts of female bus conductors, the issue of segregating bathrooms and changing rooms, issuance of more uniforms, complete elimination of body searches, forced baths at the garages, and spying systems emerged first as practical concerns. However, in the Tokyo Municipal Bus struggle of 1928, none of these were even mentioned… only the demands of menstruation leave and stillbirth mourning leave… What these female bus conductors were aware of was the price [i.e. value] of reproduction” [4]

So, rather than asking for separate toilets, changing areas, and the prevention of sexual harassment (the women were even being spied on!), the labour union simply uses the power of the ‘fertility’ argument to at least get time off during menstruation (when I am guessing these conditions shifted from being very uncomfortable to absolutely intolerable).

In this way, problems caused by very poor working conditions are reframed as being due to the female (reproductive) body. Unsurprisingly, this is why ‘protectionist’ policies never seem to work out well for anyone [10]. The employer escapes their responsibilities, all workers remain subject to poor working conditions, the (perceived) cost of employing women goes up significantly, and women are pressured out of paid employment into (unpaid) childcare work- which reinforces gender inequalities in the home and at work.

In fact, ‘protectionist’ policies even seem to have a negative impact on national fertility rates; Japan and South Korea are both currently experiencing major population crises… [11]

So when deciding if menstrual leave is a good idea, we should really take a look at the conditions found in the countries that already have the policy (in some cases for over seventy years). Menstrual leave policies have largely been implemented in the context of exploitative labour or otherwise poor working conditions. In a workplace lacking in basic health and safety, access to toilets, or rest breaks- time away from work during menstruation may be ‘better than nothing’, but ultimately does little to improve the situation of women workers.

In part 4 of this series, we will look at how menstrual leave has been informed by, and in turn contributed to, discrimination against women.

[2] For some insight into the working conditions that many young women (and some men) face in East Asian factories see;

BSR (Business for Social Responsibility) (2013) Between the Lines: Listening to Female Factory Workers in China https://www.bsr.org/reports/bsr_female_factory_workers_china_en.pdf

Clean Clothes Campaign (2016) What happened to the workers in Indonesia? Read the insights about the 346 women and men in Indonesia demanding fair compensation from sportswear brands Mizuno and adidas, after they were intimidated and lost their jobs in 2012.

[5] As reported in Ilich (1994); “A brief synopsis presented in… [a Russian] labour hygiene journal… of some experimental work conducted in a confectionary factory… noted that up to 60% of the women included in the experiment found work ‘difficult or worse than usual’ during menstruation. A controlled experiment had demonstrated that the introduction of a short, five-minute, break twice a day could improve women’s health and physical development as well as increasing productivity“(P. 1411)

[9] It is worth noting that such protectionist policies were very popular in many countries after the World Wars. Think of the UK in the 1950s when it was also expected that women would retire upon marriage or pregnancy. ‘Maternity leave’ is also a good example of a protectionist policy- designed to help support women workers maintain their jobs after giving birth, it still results in discriminatory practices e.g. not interviewing, recruiting, or promoting women of reproductive age- on the assumption that they are likely to require maternity leave.  See https://www.theguardian.com/money/2014/aug/12/managers-avoid-hiring-younger-women-maternity-leave. More progressive country policies, now promote ‘parental leave’ instead- with a ‘use it or lose it’ incentive in order to encourage more men to do their fair share of childcare in the first few months of their child’s life.