Previous blogs have looked at the way in which the female reproductive system (typically the womb– or the menstrual cycle by association), has been used against women in order to justify gender inequality. The second instalment of this International Women’s Day special blog describes how the myth of the ‘irrational female’ further evolved in 18th – 19th Century Europe, and how emerging democracies were forced to decide if women were ‘able’ to become citizens…

During the French Revolution (1789-1799), women literally fought side-by-side with men to overthrow the monarchy and create a new republic… However, once this was goal was achieved, women were still denied the right to be citizens.

Geneviève Fraisse‘s excellent book, ‘Reason’s muse; sexual difference and the birth of democracy‘, outlines the way in which such an obvious exclusion of half the nation’s population required conscious reasoning, in order to justify how it was apparently compatible with democratic ideals. Interestingly, the general consensus was that women were, in fact, fully rational beings. However, due to their biological ‘nature’, and critical social role (as wives and mothers), they must forfeit their individual rights for the ‘greater good’ of the nation (and obviously without having a say in this decision!) [1].

Fraisse’s conclusion is that ‘behind the obvious desire for male domination lurked a profound anxiety… the fear of confusing the sexes‘ [2]. A fear that if women were to have full rights as citizens, that they would no longer consent to being wives and mothers, and simultaneously, men and women would no longer find each other sexually attractive. This purely imagined threat to the French population was enough to justify discrimination in a nation supposedly defined by its commitment to equality.

The female reproductive system was used to emphasise the ‘natural’ differences between men and women, which in turn enabled ‘political differences’ to exist. Not that this betrayal of revolutionary women went unopposed, as shown by this amazing pamphlet written by Fanny Raoul, in 1801 [3]; 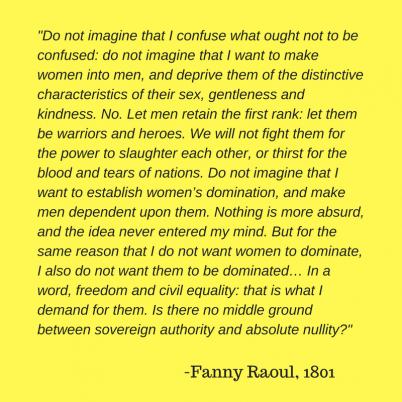 Radical reformers and the question of women’s rights…

Back in the UK, the end of the Napoleonic Wars in 1815 had resulted in periods of famine and chronic unemployment, exacerbated by the introduction of the Corn Laws [4]. By the beginning of 1819, the pressure generated by poor economic conditions, coupled with the relative lack of suffrage (i.e. no voting rights for working class men, or any women) in Northern England, had enhanced the appeal of political radicalism [4].

Samuel Bamford (1788- 1872), a well-known English radical, claims that working class women became involved in the struggle for universal suffrage in the summer of 1818. He describes a meeting at Lydgate in Saddleworth where women were allowed to vote for and against resolutions; “This was a new idea; and the women, who attended numerously on that bleak ridge, were mightily pleased with it.” [5]

We also know that women took part and were injured in the Peterloo Massacre, in 1819. They attended ‘carrying their own flags, distinctively dressed in white and with their own women leaders prominently displayed on the speakers’ platform. In the circumstances, the military’s brutal attack on the crowd appeared to be incited, among other things, by a sense of manhood under serious threat from this provocative female presence.’ [5]

Chartism was a working-class movement for political reform in Britain that existed from 1838- 1857. ‘Chartists’ had signed a charter demanding that: (1) All men should qualify to vote (2) Constituencies should have an equal number of electors (3) Voting should be by secret ballot (4) A new parliament should be elected every year (5) There should be no need to own or rent a certain amount of property to qualify to stand as a candidate (6) MPs should receive a salary (to enable working class men to afford to become MPs).

‘There were thousands of female Chartists. Women held their own meetings at which they took the platform and spoke publicly. They sent out press releases, donated money, attended classes and marched alongside men in processions and demonstrations under their own banners’ [6]. Chartists as a wider movement were not directly asking for women’s right to vote, since some leaders (e.g. William Lovett) thought that this would undermine their cause [6]; 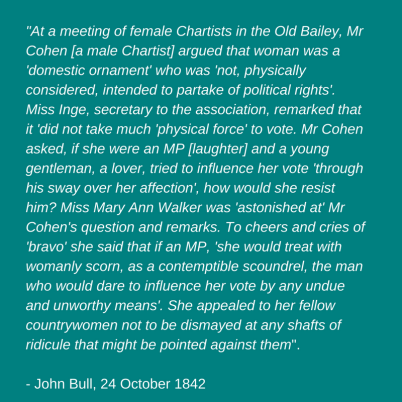 Chartism did not directly generate any reforms but over time, five of the six reforms were eventually adopted by the UK parliament (only the annual elections have yet to be implemented!)… However, it is clear that the participation of women in such political movements provided good experience and inspiration for supporters of women’s suffrage. Next time we take a look at the role of 19th and 20th Century medicine in justifying continued political discrimination against women…